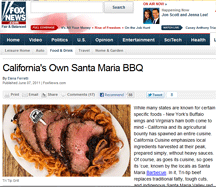 The barbecue season is heating up, and so is recognition for Santa Maria Style Barbecue.

Two weeks ago, we saw a big spread on Santa Maria BBQ in the Arkansas Democrat-Gazette. Next, our local barbecue style was featured in an official itinerary published by the California Travel and Tourism Commission.

And now FoxNews.com has published a magnificent feature story on the origins and ingredients of Santa Maria Style Barbecue.

In the story, writer Elena Ferretti observes, “California and its agricultural bounty has spawned an entire cuisine. California Cuisine emphasizes local ingredients harvested at their peak, prepared simply, without heavy sauces. Of course, as goes its cuisine, so goes its ‘cue, known by the locals as Santa Maria Barbecue. In it, Tri-tip beef replaces traditional fatty, tough cuts, and indigenous Santa Maria Valley red oak stands-in for hickory, mesquite or post oak.”

She adds, “Given its historical roots and native ingredients, the fact that it’s hard to find only adds to the irony.”

But, of course, this blog exists to help you find it. For starters, you can visit one of our local barbecue restaurants, or you can cook it yourself by ordering tri-tip, seasoning, red oak and more from local purveyors.

Thanks to Elena Ferretti and FoxNews.com for spreading the sizzling good news about Santa Maria Style Barbecue!