An Evening with Roger McGuinn 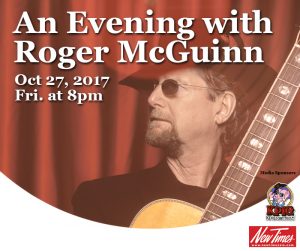 Presented by The Clark Center Association

After working with The Limelighters, the Chad Mitchell Trio, and Bobby Darin early in his career, Roger McGuinn was already a seasoned veteran of the New York and Los Angeles music scene when he co-founded the legendary group the Byrds with Gene Clark and David Crosby in 1964.

The Byrds went straight to the top of the charts, with songs such as “Mr. Tambourine Man”, “Turn, Turn, Turn (To Everything There is a Season), “Eight Miles High”, “I’ll Feel a Whole Lot Better”, and “So You Want to Be a Rock ‘n’ Roll Star”.

Don’t miss this chance to see one of the fathers of 1960’s rock and folk rock live in action!

*Multiple show discounts, and group sales discounts, must be purchased in one single order.
Contact Neil in our Box Office to arrange. neil@clarkcenter.org or call 805.489.9444

ALL SALES ARE FINAL. NO REFUNDS OR EXCHANGES.

Kick Your Feet Up