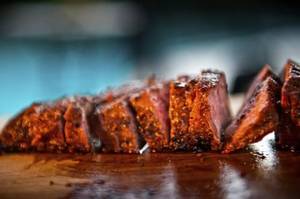 In an earlier post, we delved into the origins of tri-tip as a classic component of Santa Maria Style Barbecue. First popularized by a local butcher in the Santa Maria Valley, tri-tip is a triangular cut of beef that is now ubiquitous across the Central Coast, not only in traditional Santa Maria BBQ preparations, but in variations such tri-tip sandwiches.

For many years, tri-tip was a truly local phenomenon, but word has spread about this once-overlooked cut. And while many people around the nation still report that their area butchers are unfamiliar with it, there’s no doubt that tri-tip is today enjoying an unprecedented following.

Perhaps the most vivid evidence of the tri-tip phenomenon is the recent opening of the Tri Tip Grill in New York City, as reported by the Modesto Bee. Proprietor John Pickerel says, “I asked myself, ‘What do we in California have that New York doesn’t?’ The answer was tri-tip.”

Later in the story, Bee food writer Allen Pierleoni elaborotes on the history of Santa Maria BBQ, and how tri-tip became an addition to the official barbecue menu: “Fast-forward to the late 1950s, when Santa Maria butcher Bob Schutz experimented with the cut, which is one of the three muscles in the bottom sirloin of the steer. Meat cutters routinely diced it into stew meat or ground it into hamburger, but not Schutz on that day. Instead, he seasoned it Santa Maria-style and cooked it on a rotisserie. His ‘creation’ was surprisingly delicious. He named it ‘tri-tip’ because of its shape and promoted it locally. Its popularity spread statewide.”

Now, tri-tip is hitting the big time all the way to the Big Apple, adding to the growing legend of Santa Maria barbecue.