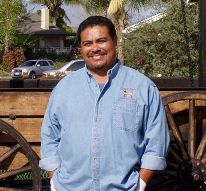 We first learned about Michael Hockenhull and his catering business when he posted some magnificent Santa Maria BBQ photos on our Facebook page. For the past 21 years, Michael’s Santa Maria Barbecue & Grill has been serving traditional Santa Maria Style Barbecue at special events and gatherings across Southern California’s Inland Empire.

Michael lives in Chino Hills with his wife and two children. We recently caught up with him as part of our Three Questions interview series:

What inspired you to start a Santa Maria BBQ business in Chino Hills?

There was nothing like it out here. We have a great following in the Inland Empire.

I was introduced to the Santa Maria world from a man who was born and raised in Santa Maria. He had just moved to the Los Angeles area and was starting his own BBQ catering business. It started as a part time job for me, fortunately for him I liked cooking, eating and talking. He taught me everything I needed to know about running a business. I can’t thank him enough.

You must sometimes serve folks who’ve never had Santa Maria BBQ before. What is the typical reaction when they try it for the first time?

I love to serve first-timers, the look on their face is priceless. Then they give me a big hug for making their belly happy!

What’s your top tip for folks who want to prepare their own Santa Maria BBQ?

Keep to tradition, do not try to re-invent the wheel. Simple seasonings, red oak wood and please take your time, your grill is not a microwave.