The Sweet Side of Santa Maria BBQ 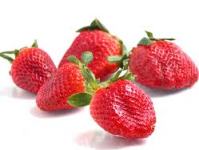 If you’re new to Santa Maria Style Barbecue, you might ask why items like pinquito beans, strawberry dessert and homegrown wine play such a role in the local traditional menu.

After all, isn’t barbecue about the beef? Well, Santa Maria BBQ mostly about the beef, but it’s also about a culinary life here in the Santa Maria Valley, where the farm is rarely far from the table. Indeed, this is one of many things that set Santa Maria Style Barbecue apart from other regional American barbecue styles.

Consider the latest Santa Barbara County crop report published last week. The county’s strawberries–nearly all of them grown here in the valley–remain the top cash crop at $464 million (!) for 2013, followed by wine grapes. Countless other crops, such as broccoli, spinach, bell peppers and, yes, pinquito beans are grown locally as well.

So it’s no wonder that the Santa Maria BBQ menu is filled to the brim, not just with top-block sirloin or tri-tip, but also with an abundance of fresh foods and wines grown right here in the valley!