The (Not So) Secret BBQ 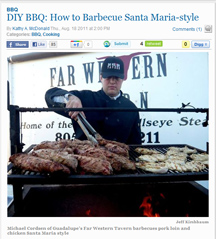 Santa Maria Style Barbecue has been on a magnificent streak of media coverage, and the latest comes from L.A. Weekly’s fine how-to feature this week on our regional culinary tradition.

Santa Maria Style Barbecue is the barbecue world’s best-kept secret, but the secret is increasingly out as foodies and food writers alike champion its charms!