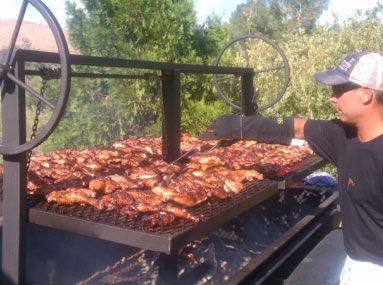 Here’s news of yet another Santa Maria Valley native intent on spreading the good news about Santa Maria Style Barbecue!

Originally from Lompoc, John Cheney grew up grilling with his dad using California coastal red oak and a big oil drum with a crank in order to raise and lower the grill over the fire.

He says it’s not Santa Maria Style Barbecue if you don’t have the red oak, and that Pinquito beans (which he ships direct from Santa Maria Valley as that is the only place where they are grown) are another key part of the fare, adding that they never get mushy and hold flavor really well.

Cheney, who is also managing partner at a second restaurant called Big Water Grille near the Diamond Peak Ski Resort, also in Incline Village, says that his established strong customer base is supporting Gus’s Open Pit BBQ with gusto.

Just more evidence that while Santa Maria BBQ is homegrown, its flavors can be enjoyed anywhere!