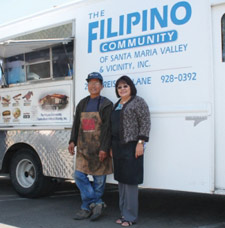 While Santa Maria Style Barbecue is staunchly rooted in local tradition, it is not inflexible.

Indeed, while you can find plenty of tried-and-true Santa Maria BBQ around these parts, there are plenty of culinary riffs and offshoots, too—such as Santa Maria tri-tip sandwiches and non-traditional cuts cooked over red oak.

Local cultural communities—such as Filipino, Mexican and Swiss-Italian—have all brought their own twists to the table as well.

One shining example is the Filipino Community Center Food Truck, a weekend mainstay at the Smart & Final parking lot on South Broadway in Santa Maria.

As spotlighted recently in the Santa Maria Sun (as well as in Sunset magazine’s epic feature on Santa Maria BBQ), the truck operates as a fundraiser for the community center’s building fund and scholarship programs.

The experts at the Filipino Community Center Truck serve classic Santa Maria tri-tip with a twist—a secret soy-based marinade instead of the traditional local dry rub.

The truck specializes in Phillipine fare such as adobo, but they say “Of course we have to sneak in some tri-tip!”

It’s just another tasty example of how Santa Maria Style Barbecue is not only a truly traditional cuisine, but also a departure point for creative cooks and chefs.