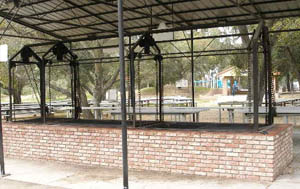 In many public parks, the centerpiece is a sculpture or fountain.

But at Pioneer Park here in California’s BBQ Capital, the centerpiece is a massive Santa Maria Style Barbecue pit that can hold up to 800 pounds of top block sirloin over coals of native red oak.

The roots of Pioneer Park extend nearly 90 years, ever since a trio of ranchers invited their friends to a barbecue on Alamo Creek near Porter Ranch. According to this article by local historian Shirley Contreras, “Everyone had such a good time reminiscing about the old days that the group decided to make this an annual event.”

This group of pioneers was originally known as the Old Timers. Then, according to Contreras: “In July of 1924, the ‘Old Timers’ became the Santa Maria Valley Pioneer Association, and in 1926 the group dedicated its new Pioneer Park on land leased from Newhall Land and Farm Company on the Cuyama Highway, located about 13 miles from Santa Maria.”

The lease on the park land was later withdrawn, and the Pioneer Association picnics moved to Waller Park in 1941, and they later moved again before settling into the current Santa Maria Pioneer Park: “History was again made on July 14, 1996, when the Santa Maria Pioneers dedicated their new park during the 72nd annual picnic. A crowd of 1,000 pioneers was on hand to greet old friends and to celebrate the official opening of Santa Maria Pioneer Park.”

The epic barbecue pit was built by several of the pioneers, and can accommodate cooking on both rods and adjustable screens. The park spans 15 acres at 1150 West Foster Road in Santa Maria. In addition to the large barbecue area, it also features a pavilion, softball field, children’s playground, and horseshoe pits. Groups may rent facilities at the park for their events, and the barbecue is available for just a $20 surcharge.

Pioneer Park and its magnificent barbecue pit are just one of many vivid examples of how our local barbecue heritage runs deep. Santa Maria Style Barbecue is born of tradition, but its role in the community is timeless!