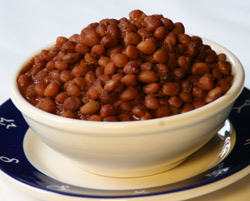 Santa Maria Style Barbecue isn’t just about the meat…It’s about community, tradition and an entire menu that has been perfected over multiple generations!

Perhaps the most distinctive part of the menu is the pinquito bean, which is a small pink been that originated in the Santa Maria Valley, and which remains a commercial crop exclusive to the region.

And now that fall has arrived, so has the local pinquito bean harvest. The beans are planted every May, and by late September and early October, they are ready to be harvested.

The origins of the pinquito bean remain cloudy. They’ve been grown locally at least since the 1930s, and have since become synonymous with our local barbecue. Some have suggested that they came from Mexico, but that is unconfirmed. So it’s a mystery that remains to be solved and, for now, savored!

The Wall Street Journal recently summed pinquitos up perfectly in a story about classic American Foods: “Pinquitos are small pink beans with a tender skin but a rich, slightly firm texture even when completely cooked; they have a faintly herbaceous flavor with an earthy overlay, like a more refined version of pinto beans. They don’t seem to grow anywhere other than around the Santa Maria Valley on California’s Central Coast. Pinquitos are delicious and unusual beans, and make a good side dish even if you’re not grilling.”

So raise a toast to the piquito harvest, and put some beans on the stove for a distinctive taste of the Santa Maria Valley!