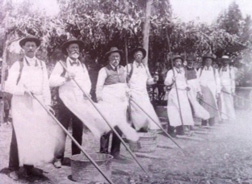 Back in the day, when you wanted to make Santa Maria Style Barbecue, you didn’t need a grill–you needed a pick and shovel!

Indeed, Santa Maria Style Barbecue was born in the 1800s when local rancheros would hosts celebratory feasts, stringing large pieces of meat on willow poles and cooking them over earthen pits filled with coals of native red oak.

In R.H. Tesene’s definitive book Santa Maria Style Barbecue, there’s a photo from 1904 (pictured here) showing volunteers tending the barbecue over an earthen pit at an Independence Day celebration, confirming that this method was still being used in the early 20th century.

So when did Santa Maria Style Barbecue transition to the familiar above-ground grills used today? There’s a clue in Tesene’s book, when he writes that “a group of Santa Maria businessmen acquired a house on Broadway as a place to get away from it all” and founded the Santa Maria Club 1920.

Tesene notes that Ed Craig, one of the founders, “built a huge barbecue pit for the club on its opening in 1920, after having built many small pits for his personal friends and others.” From this, we can deduce that the above-ground pit had established a foothold by the 1920s.

The Santa Maria Club would soon become known for its epic community barbecues. The club started its Stag Barbecues in 1931, held on the second Wednesday of every month and serving up to 700 guests. As with the earthen pits, the meat was cooked on rods suspended over the red oak fire.

Large Santa Maria Style Barbecue pits endure at local clubs and parks, but today this culinary tradition has become downright portable with the advent of personal Santa Maria grills made right here in the Santa Maria Valley. These grills forgo rods in favor of an adjustable screen that can be raised and lowered, and you can get one at the Costco in Santa Maria.

But while Santa Maria Style Barbecue has become easier to prepare over the past century, you can still say that it is truly homegrown from the ground up!