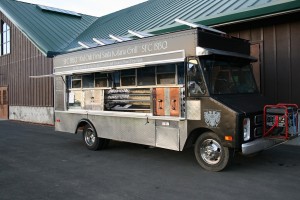 As we reported earlier, the Santa Maria Valley wine country is quickly emerging as one of California’s finest wine regions, creating a local flavor powerhouse when combined with the regional culinary tradition of Santa Maria Style Barbecue.

Now we find out that the Santa Maria Valley foodie train is rolling right into the heart of Napa Valley. Indeed, a new mobile food purveyor is now traveling around Napa Valley, serving a sizzling taste of Santa Maria BBQ.

In the words of FoodTruckTalk.com: “Hey Napa, it’s time for a change!  You’ve been known for wine and wineries for a long, long time.  Starting now it’s a new era in Napa.  From now on you’ll be known for your BBQ, the SFC BBQ Food Truck is on the road! SFC BBQ features great tasting barbecue using traditional Californian recipes from the mid 1800s that is filled with Spanish influences and indigenous ingredients from the Santa Maria Valley.  Using red oak in their bbq pit and smoker SFC BBQ turns out some mighty fine bbq!”

Sounds like Napa Valley is about to get a delicious dose of local flavor…Santa Maria Style!