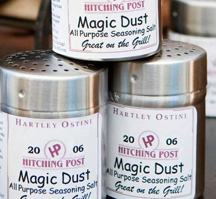 The famed Hitching Post II restaurant, the sister restaurant to the iconic original Hitching Post in the Santa Maria Valley has announced a naming contest for its “Magic Dust” seasoning. The seasoning is based on the traditional Santa Maria BBQ blend of salt, garlic and black pepper, but with a dash of Cajun influence.

This is where you come in, dear Santa Maria BBQ enthusiast, because the Hitching Post II is running a re-naming contest on its Facebook page over the next two weeks. A panel of judges will select the winners who will be announced at the Hitching Post II Open House on April 21, 2013 in celebration of the Santa Barbara Vintners’ Festival Weekend. The 1st place winner will receive a $200 gift certificate with six more prizes available.

So fire up the barbecue, grab a glass of Santa Maria Valley wine and get those creative juices flowing. You might end up with a big meal or two, not to mention bragging rights in the land of Santa Maria Style Barbecue!