Local BBQ Seasoning in The Spotlight 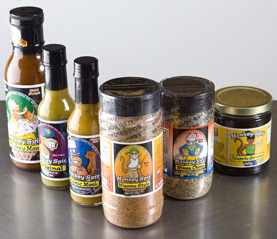 Santa Maria Style Barbecue is the culinary hub of the Santa Maria Valley, but that hub has many spokes as local chefs and food purveyors add creative twists to our regional food traditions.

One example is Monkey Spit, a purveyor of spices and sauces based in the valley’s rural Tepusquet area. Founded by Santa Maria Valley native Paul Smith, Monkey Spit’s offerings are as creative as its brand name, and now find themselves in the spotlight in this recent feature story in the San Luis Obispo Tribune.

Smith started Monkey Spit in 2008, and brought on longtime friend Rudy Stowell as a business partner. Smith’s family roots in Tepusquet date back to the early 1900s.

Of course, Nipomo refers to the small town north of Santa Maria, which has its share of Santa Maria BBQ heritage. As Budge notes, Monkey Mop “proved to be such a winner that it brought home competitive awards from such venerable barbecue cities as Kansas City and Mobile, Ala.

Meanwhile, Smith’s sauces barbecue sauces such as Monkey Mop and Atomic Mop represent a departure from the local barbecue style, as Santa Maria Style BBQ is renowned for its sauce-free, dry-rub style. As Budge notes, Monkey Mop “proved to be such a winner that it brought home competitive awards from such venerable barbecue cities as Kansas City and Mobile, Ala.”

A company from Santa Maria winning awards in such saucy barbecue cities as Kansas City and Mobile? Now that’s what you might call monkey business of the highest order!