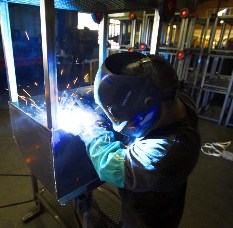 Santa Maria Style Barbecue is local to the core.

Indeed, this regional culinary tradition is rooted in local methods and ingredients that have been perfected over generations in the Santa Maria Valley. That’s what makes it so special, the fact that you are enjoying a meal that uniquely expresses a sense of place.

In Santa Maria BBQ, the meat is cooked over coals of native red oak, using methods that originated in the valley. The traditional seasoning is a blend of salt, pepper and garlic that was established by local barbecue enthusiasts. The menu includes pinquito beans, which are native to the valley. One of Santa Maria BBQ’s signature cuts, tri-tip, was popularized by a local butcher. You get the drill…

Now comes a story in the Santa Maria Times about how one local barbecue company is going the extra mile to keep it local. According to the story, Santa Maria BBQ Grill Outfitters not only produces Santa Maria-style grills for major retailers far and wide, it does so using locally sourced materials, such as the metal used for its grills.

“We try to keep business local by purchasing materials from Santa Maria companies like B&B Steel, which supplies the metal for the barbecues,” says Vincenza Caicco, the company’s sales manager. Pictured here is one of their grills being welded at the company’s 20,000-square-foot factory in Santa Maria.

Bravo to Santa Maria BBQ Grill Outfitters for adding yet another local twist to the tradition of Santa Maria Style Barbecue!

Santa Maria BBQ Grill Outfitters produces grills with an adjustable screen, which is essential for cooking true Santa Maria Style Barbecue at home. Click here for our earlier story on the company.