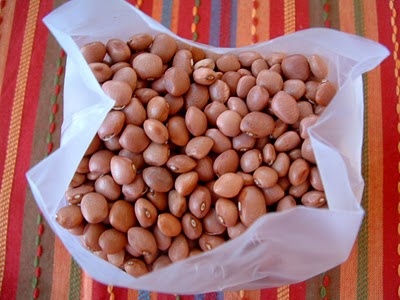 Indeed, autumn is also the signature season for pinquito beans, the indigenous little pink bean that is an essential component of the Santa Maria Style Barbecue menu.

To learn more about the local pinquito bean harvest, we reached out to John Porter of Alamo Farming, who is a third-generation Santa Maria Valley pinquito bean farmer.

During the growing season, the beans are irrigated every seven to 10 days, depending on the weather conditions.

“As the plant matures, it forms bean pods on its stems, with 20 to 25 pods per plant,” John says. “The pods typically have five or six beans per pod. At maturity, the plant will dry down automatically and harvest preparation will begin around the middle to end of September.”

“Harvest begins with a machine that picks up the windrows and thrashes the plants and pods to separate the beans from the chaff,” John says. “The beans are blown free of dirt and are transferred to a hopper. The beans are delivered by truck to a bean warehouse, where they are cleaned even more and sized if necessary. At this time they are bagged into different sized bags, depending upon the customer.”

So there you have it, the scoop on how pinquito beans are grown and harvested in the Santa Maria Valley, and made ready for your Santa Maria BBQ meal.

P.S. Click here for more on the origins of pinquito beans as an exclusive local crop that is synonymous with the Santa Maria barbecue experience.