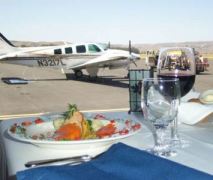 In doing so, they include Santa Barbara, which is an hour south of Santa Maria, as a hub for Santa Maria BBQ. They might have been remiss in not pointing their readers to the true landmarks of Santa Maria Style Barbecue in the Santa Maria Valley, such as Shaw’s Steakhouse, the Hitching Post and Far Western Tavern. But as they note, Santa Barbara is certainly well versed in Santa Maria BBQ, and they are probably and understandably more inclined to point readers toward places closer to major airport hubs such as Los Angeles.

That said, we will take this opportunity to remind you that the Santa Maria Valley has it’s own airport with commercial flights to and from Los Angeles and Las Vegas. Better yet, the Santa Maria Airport offers private pilots a unique “fly and dine” experience. Indeed, pilots can taxi right up to side of the airport’s Radisson Hotel, park their plane and walk to lunch at the hotel’s Vintner’s Grill. We’re told that many pilots fly into town for the grill’s famous Sunday brunch, and the Santa Maria tri-tip sandwich is a popular lunch item.

Another memorable on-site attraction is the Santa Maria Museum of Flight, which features a variety of planes, models, photos, memorabilia and exhibits, including a restored F4 fighter jet that served in Vietnam and a 1929 Fleet biplane. The museum also features several Hollywood movie props, including  an H-1 Racer from The Aviator, a full-scale Wright glider from Winds of Kitty Hawk and an original wooden hangar from The Rocketeer.

Whether you come by wheels or wings, the Santa Maria Valley is ready to welcome you with what Sunset Magazine once called “the world’s best barbecue.” So pack your appetite and we’ll see you soon!