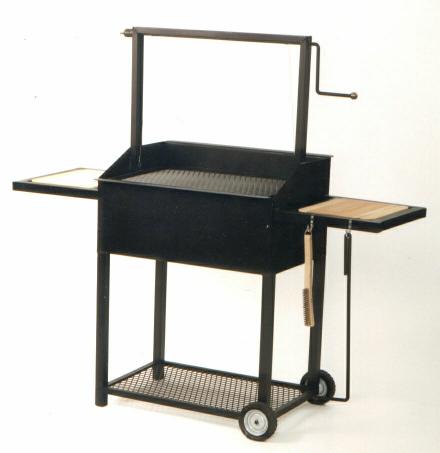 “A Santa Maria Grill is designed more for a wood burning barbecue than charcoal,” says Joe Caicco, owner of Santa Maria BBQ Grill Outfitters, a leading local grill manufacturer. “And because you can adjust the rack up and down over the coals, it offers more versatility.”

Joe adds that this adjustable feature enables even a beginner ‘cuer to turn out delicious meat. The adjustable rack controls the meat’s proximity to the heat source, specifically hot coals of native red oak if you are preparing authentic Santa Maria Style Barbecue. This enables you to sear in the flavorful juices, then raise the meat to continue cooking while avoiding burning. Click here for a quick guide to the traditional Santa Maria BBQ preparation.

Joe explains that simplicity is another feature of the Santa Maria Grill. “These grills offer a quick turnaround compared to slow smokers popular in other parts of the country,” he says. “With those you might start your meat at 4 a.m. in order to eat by 5 p.m., but with Santa Maria Grills, you can start your fire and be eating within 45 minutes.”

Joe began working with Santa Maria Grills nearly 50 years ago when, as a teen, he helped build grills for his dad’s business, J&J Barbecue Pits. Having operated Santa Maria BBQ Grill Outfitters now for eight years, Joe is seeing exciting growth in sales as more people understand the concept of Santa Maria Grills. “Certain Costco and Home Depot stores are now carrying our products,” Joe says. He adds that his best-selling Santa Maria Grills are the 30×20 “backyard barbecues” (pictured here) while the “tailgate” size comes in at a close second.

And what advice does Joe have for someone attempting Santa Maria Style Barbecue in a Santa Maria Grill for the first time? “With a Santa Maria Grill, you don’t need to build a big fire,” he says. “Just get the coals going nicely and then raise and lower the rack as needed. It might char the fat cap on the outside, but that seals the juices inside leaving nice red meat underneath.”