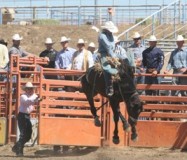 Get ready for bull riding, barrel racing, steer wrestling and team roping, to name a few of the exciting events that will unfold at the Elks-Unocal Event Center in Santa Maria. The festive parade takes place on South Broadway on Saturday, June 6 starting at 9 a.m. Of course, there will be many opportunities to enjoy Santa Maria Style Barbecue in and around the rodeo and parade. Click here for tickets and information.