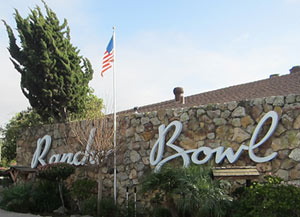 One of the biggest testaments to Santa Maria Style Barbecue is that several legendary local barbecue restaurants–such as the Hitching Post, Far Western Tavern and Shaw’s Steakhouse–have all been going strong since the 1950s. And to that list, you can also add Rancho Bowl in Santa Maria, a local institution since 1959.

Long known for its Santa Maria Style oak-pit tri-tip sandwiches, Ranch Bowl is now a more delicious experience than ever under the direction of new Executive Chef Brenda Vasquez, a Santa Maria native who attended the Culinary Institute of Arizona.

As noted in this story by Hayley Thomas of the Santa Maria Sun, Vasquez’s menu is “a blend of mid-century diner comfort and modern culinary creation.” It appears to be a hit, as food sales have tripled!

Another attraction is the inimitable ambiance of Rancho Bowl. As Thomas puts it, “The old-school, Santa Maria-style barbecue and banquet room where local folks routinely wed up and party down, the retro-chic bar adorned in black-and-white photos, and the family-owned-and-operated feel keep the spirit of the late owners alive and well.”

Yet while the vibe is authentically old school, the bowling experience is remarkably modern, with 32 remodeled lanes, couches and coffee tables, LCD touch screen consoles with integrated cameras, and flat-screen televisions, not to mention interactive bowling games with Facebook connect.

Rancho Bowl is operated by Victoria Murray, daughter of founder Mili Acquistapace. One hallmark of Santa Maria Style Barbecue is that it is always moving forward, but never abandons its roots–and Rancho Bowl is yet the latest example!