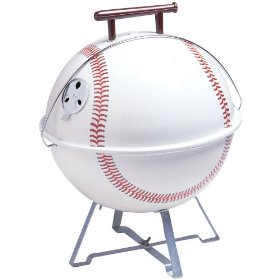 Here, an entire corner of the museum is devoted to photographs and information highlighting the region’s old-time families and individuals known for their role in local barbecue lore. Some of the most comprehensive books on the history of Santa Maria Style Barbecue are also available for sale.

Of course, hand in hand with barbecue is another favorite American pastime . . . baseball. And now through the end of September, the Santa Maria Valley Historical Society Museum is featuring an exhibition on the rich history of baseball in the Santa Maria Valley. Displaying many artifacts from the personal collection of longtime local Eddie Navarro, the exhibit includes items from little league teams, school and city leagues, vegetable grower company teams and women’s teams.

“Santa Maria has a vibrant baseball history,” said Shirley Contreras, a museum staffer. “A few of our local guys went to the majors including Robin Ventura and Bryn Smith, and many of them went to the minor leagues, too. When World War II broke out, many of our budding stars went off to war and by the time they came home, it was too late for them to pursue careers as baseball players.”

She adds that the display includes photographs of teams from 1903 to the recent past as well as memorabilia including gloves, equipment and uniforms.