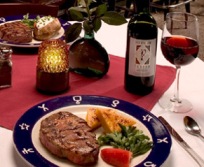 The Santa Maria Valley boasts a number of legendary restaurants that specialize in the local barbecue experience, including several that have been going strong for more than 50 straight years. So don’t forget to bring your appetite the next time you visit California’s Central Coast. Following are some local barbecue favorites:

The Far Western Tavern
The Far Western Tavern was featured on the Food Network’s BBQ with Bobby Flay and has been celebrated in Sunset magazine and elsewhere. The restaurant was founded in 1958. Today, the Minetti family brings two generations and five decades of ownership to the table, serving legendary cuisine that is rooted in local tradition yet suited for contemporary tastes.

Shaw’s Steakhouse and Tavern
Shaw’s Steakhouse is closed until further notice following a fire in the adjacent building. Established in 1953, Shaw’s Steakhouse boasts an original open oak barbecue pit inside restaurant, enabling you to watch your Santa Maria Style Barbecue sizzle as it’s served. The atmosphere is intimate and the portions are large.

F. McLintock’s Saloon & Dining House
Known for its savory steaks, ocean views and high water pours, F. McLintocks specializes in oak-pit barbecued steaks and ribs, as well as fresh seafood and salads. The portions are legendary, so come hungry! A butcher shop and gift shop are also part of the F. McLintock’s experience.

Barbecue Fundraisers
Barbecue fundraisers often fire up on weekends at the CVC Pharmacy and Lemos Pet Supply parking lots, among other locations in downtown Santa Maria. Just follow the smoke!

P.S. For a complete listing of restaurants in the Santa Maria Valley, please click here.