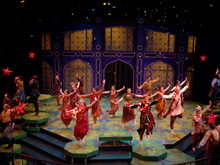 In addition to fine wine and world-famous barbecue, the Santa Maria Valley is also home to an abundance of performing arts and cultural experiences.

Meanwhile, the Santa Maria Civic Theater, which is known as “the little theatre off Broadway,” is the longest continuously running performance group of any community theater in the area between Ventura and Monterey. Another local theater institution is the Great American Melodrama & Vaudeville in nearby Oceano, which stages top-notch productions of great classic comedies, musicals and melodramas. The Santa Maria Philharmonic Society stages a wide range of classical music concerts across the valley as well.

The Santa Maria Museum of Flight features a variety of planes, models, photos, memorabilia and exhibits, including a restored F4 fighter jet that served in Vietnam and a 1929 Fleet biplane. The museum also features several Hollywood movie props, including  an H-1 Racer from The Aviator, a full-scale Wright glider from Winds of Kitty Hawk and an original wooden hangar from The Rocketeer.

The Dunes Center in Guadalupe offers historical and educational exhibits, as well as guided hikes and walks in the nearby Guadalupe-Nipomo Dunes, which is California’s largest coastal dunes complex. Here, visitors enjoy breathtaking views of the Pacific Ocean from atop towering mountains of sand.

These are just some of the many cultural experiences that await visitors to the Santa Maria Valley. For more information, visit www.SantaMaria.com.