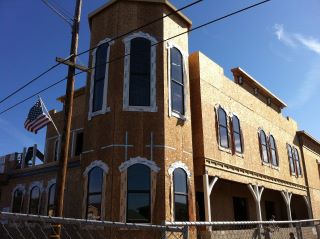 One of the Santa Maria Valley’s landmark barbecue restaurants will soon embark on a new era as the Far Western Tavern is set to open its new location in Old Town Orcutt later this summer—as evidenced by the construction taking shape at 300 Clark Avenue.

The second floor, including a signature tower room, is now up. Along one side, a patio reveals a new outdoor dining dimension to the Far Western Tavern experience (it should be noted that the original Far Western Tavern in Guadalupe will remain open until a week or so before the new restaurant is completed).

But while the building may be new, the ambiance promises to remain quite familiar. The new interior will incorporate as many legacy touches as possible, including the antique bar, cowhide curtains, large western mural, stained glass and more from the original restaurant. The layout will be similar, too, with a separate bar, expansive dining room and upstairs banquet room. And the kitchen, of course, will feature a large barbecue pit.

The Far Western Tavern was founded in 1958 by Clarence and Rosalie Minetti, along with Rosalie’s cousin Richard Maretti. Three generations of the Minetti family now own and manage the restaurant.

“Our goal with the new location is to capture the distinctive spirit and ambiance of the original restaurant,” says Renee Righetti-Fowler, granddaughter of Clarence and Rosalie Minetti. “The menu will also be very similar.”

In other words, the more things change, the more they stay the same here in California’s BBQ Capital. Santa Maria Style Barbecue is always moving forward, but also remains rooted in history and tradition. And the new Far Western Tavern is just the latest example…