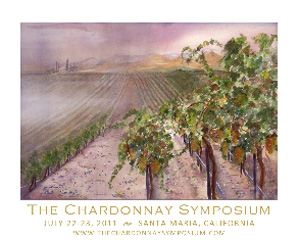 Indeed, barbecue isn’t the only thing that’s red hot in the Santa Maria Valley. Here, Chardonnay is just one of the many varietals that excel in the valley’s temperate coastal climate, which is shaped by a rare “transverse” geography that runs west to east and encourages the influx of cool marine breezes. The result is one of California’s longest growing seasons, which ensures the development of complex, flavorful and exquisitely balanced grapes. Which is why three wines grown in the Santa Maria Valley were named to the top ten slots of the Wine Enthusiast’s most recent list of Top 100 Most Coveted Wines.

The Chardonnay Symposium is the only event of its kind in the United States to focus on this popular varietal. The event begins on Friday with a Chardonnay clonal tasting and Santa Maria BBQ at Sierra Madre Vineyards, followed on Saturday by two educational panels at Bien Nacido Vineyard and Tantara Winery, as well as a star-studded luncheon at Au Bon Climat Winery.

The event concludes with a Grand Chardonnay Tasting at Byron Vineyard and Winery, featuring 50 wineries from Washington, Oregon, Sonoma and the Central Coast. Visit www.thechardonnaysymposium.com for information and tickets.