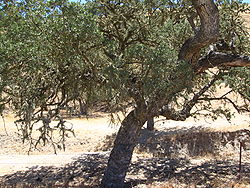 Anyone with a cursory knowledge of Santa Maria Style Barbecue knows that the traditional preparation calls for the meat to be cooked over hot coals of native red oak. Which prompts a lot of folks to ask: what is red oak, and what does it taste like?

Let’s tackle the latter question first. Perhaps the best taste description we’ve ever heard comes from a Santa Maria BBQ purveyor up in San Luis Obispo: “It tastes like the Central Coast, like sunshine and blue oceans.” How cool is that? For a more technical description, he adds, “smoky but not hickory, not mesquite.” In other words, it’s a mellow smokiness that is distinctive to Santa Maria BBQ.

So what, exactly, is red oak? It’s technical name is the Coast Live Oak. Wikipedia calls it “the only California native oak that actually thrives in the coastal environment…it enjoys the mild winter and summer climate afforded by ocean proximity, and it is somewhat tolerant of aerosol-borne sea salt. The coastal fog supplies relief from the rainless California summer heat. Normally the tree is found on well drained soils of coastal hills and plains, often near year round or perennial streams.”

A moderate marine climate with coastal plains and hills? That perfectly describes the Santa Maria Valley, which is why red oak became the natural fuel choice for barbecues prepared by local rancheros in the 1800s. From this ritual was born the tradition of Santa Maria Style Barbecue, with red oak emerging as a distinctive staple of the flavor experience.