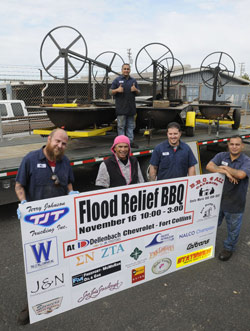 From The Santa Maria Times

“We’re trying to make their Christmas a little better…”

With that as their holiday season mission, a group of Santa Maria residents and businesses recently made their way to Colorado to serve Santa Maria Style Barbecue for a good cause. The barbecue was part of a fundraiser to aid relief efforts for the town of Estes Park and neighboring areas, which suffered extensive flood damage in September.

Said organizer Robert Bonilla, “It’s like we always say, ‘Santa Maria is always good at going to the rescue of somebody.’ It’s our tradition to help out and give back.”

And he had plenty of help. F. McLintocks restaurant donated beans, seasoning and bread. Babé Farms donated salad. Ace Pumps and other businesses helped truck the grills. Alex Bein, a graduate of a local high school and current student at Colorado State University, organized the event.

We recently wrote about another similar instance of locals giving back and helping out. So we’re not surprised by what Bonilla had to say about his own relief effort: “Everybody’s pretty much stepped up to the plate like we do here in Santa Maria.”

And when Santa Maria steps up to the plate, it’s usually filled with Santa Maria Style Barbecue!

Kudos to Bonilla, Bein and all of the participants. And Merry Christmas to all!