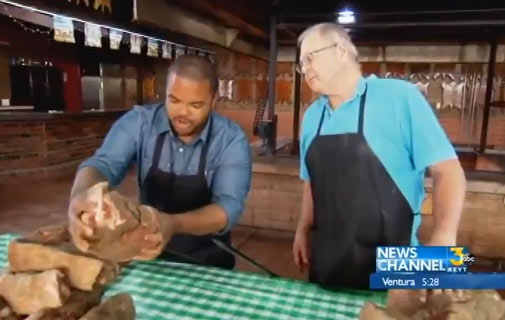 The iconic Santa Maria Elks Lodge is once again in the spotlight for its legendary prowess with Santa Maria Style Barbecue.

Last year, the lodge was featured in Sunset Magazine’s epic spread on Santa Maria BBQ. Now the Santa Maria Elks Lodge is starring in a new episode of Man Fire Food on The Cooking Channel.

While the Santa Maria BBQ menu includes pinquito beans and other accoutrements, the Cooking Channel segment focuses on the main attraction: the meat and how to cook it. And the cut of choice is top block sirloin, the original Santa Maria BBQ cut that preceded the now-popular tri-tip cut that is also associated with our regional style.

During the segment, Stahl shows Mooking how the meat is seasoned with salt, pepper and granulated garlic, then skewered on rods and cooked over coals of native red oak.

Click here for the Cooking Channel’s page on the segment, which includes links to two Elks recipes!