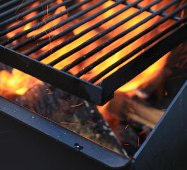 The barbecue world is known for its culinary passion, fierce opinions and regional competitiveness. So, not surprisingly, Santa Maria Style Barbecue sometimes comes under fire from those who claim that it’s not really barbecue at all, but actually grilling.

Indeed, traditional barbecue uses indirect heat or low-level heat to cook tougher meats, and it can take all day, or even days, to finish the job. Santa Maria Style Barbecue, however, consists of more tender meats prepared over the higher heat of red oak coals, and accordingly takes less time to cook. And while the meat is raised up and away from the coals after the initial searing, that’s not enough to satisfy some barbecue purists.

One of our favorite responses to the doubters comes courtesy of Chef John of Food Wishes, who was met with this comment on his piece about Santa Maria Style Barbecue:

It puzzles me that good chefs who are otherwise precise with their terminology and technique, throw that to the wind when it comes to cooking outside the kitchen…I’m sure this is a very nice grilled tri-tip – but it’s whole different technique, and a different product from a barbecued tri-tip.

This style has been called “barbecue” on California’s Central Coast since the early settlers. The common denominator being a wood fire…if they were cooking the legs or head it would be long and slow, however if they were cooking a slab of top sirloin or rib steak (the original Santa Maria BBQ), they did it more quickly over the hottest part of the fire…because it was better that way. Regardless of which cut, or how long it took, this was all just called barbecue.

Besides, “barbacoa” from which you get your barbecue term is technically steaming anyway. The animal was wrapped in wet leaves and steamed over the fire. So, if wet leaves aren’t used is it still barbecue? For these reasons, my personal definition (and that’s all it is, and to each his own), is “anything cooked over or near a wood fire is barbecue.” Every summer when millions of American’s are shopping, and they grab a package of chicken legs and say “hey, let’s barbecue!” you can say they are technically wrong, but you can’t say they are wrong.

Of course, the cooking method isn’t the only thing that puts Santa Maria BBQ in the culinary crossfire. The fact that that Santa Maria BBQ is prepared with dry rub ingredients is also a point of puzzlement for those who associate barbecue with slatherings of sauce (something we previously addressed in this blog post).

The bottom line is that it’s always been called Santa Maria Style Barbecue, and it always will be, so the naysayers might as well just do what the rest of us do in the Santa Maria Valley and across the Central Coast: light the red oak, grab the dry rub and simply enjoy the flavorful ride.