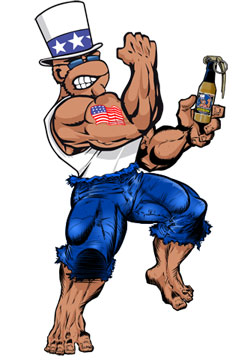 New flavors are swinging through barbecue country, and we can’t wait to share the sauce.

Founded on the Central Coast in 2008, Santa Maria’s Monkey Spit Hot Sauce is the result of accidental genius. It all went down when starving musician Paul Smith decided to make soup out of a pile of peppers that his parents had given him. When the soup turned out too spicy, Smith began experimenting, and, voila, five years later Monkey Spit has grown into a burgeoning line including the Original hot sauce; the fresh and sweet Red Jal; the hot and thick Gorilla; and the “stupid hot” Atomic Monk. Monkey Spit takes pride in keeping things simple, natural and likes to “baby” the sauce to maintain the utmost in flavor and taste.

And in a nod to the homeland of Santa Maria Style Barbecue, the company launched its “Monkey Mop” BBQ sauce last December, stating: “The Central Coast is home to some of the best BBQ in the country. In fact, tri-tip cut beef was born on the Central Coast, where us monkeys like to call home. In honor of the Santa Maria Steak and Sunday afternoon BBQs at the park, Monkey Spit Hot Sauce is proud to announce our new BBQ sauce: Monkey Mop BBQ.”

Today, Monkey Spit can be found in a variety of Central Coast markets including Old Town Market (its first customer); Kay’s Country Kitchen; and Jack’s Restaurant. The Monkey has even made it to the shelves of Pooki’s Cookies in Pahoa, Hawaii.

The Santa Maria Valley may be famous for its homegrown dry-rub barbecue, but if you want to change things up, you now know who to monkey around with!