California’s Cut: Everything There is to Know About Tri-Tip 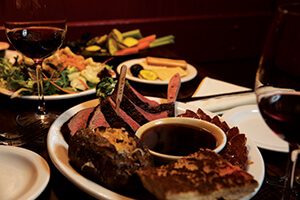 The iconic Santa Maria Style barbecue started as top-block sirloin roasted over a red oak fire—a tradition that dates all the way back to the Valley’s rancheros in the mid 19th century. Since its origins all of those years ago, though, Santa Maria Style has grown to include tri-tip, a small, triangular cut from the sirloin that our Valley popularized in the 1950s. A tender and lean cut, tri-tip actually has a history with (almost) as much depth as its flavor profile. Today, then, we’re talking the story behind this California cut. We’ll even offer up some tips for cooking yours to pure perfection. Read on for an in-depth look at every Santa Marian’s favorite cut of meat!

How did tri-tip come about?

Legend has it that Bob Schutz, the then-owner of Santa Maria Market on North Broadway, first introduced the tri-tip to locals’ taste buds in the 1950s. Prior to this, tri-tip was mainly written off as a cut used only for ground beef or stew meat (more on this below!)—but no one thought to prepare and eat it as you would a steak. Thanks to Schutz, Santa Maria locals and passersthrough alike began diving their forks into this unbelievably juicy and tender cut—and the rest is history. Santa Maria is now credited with the tri-tip’s rise in popularity, which is why, to this day, the tri-tip is often referred to as “California’s Cut” or “Santa Maria Steak” (we prefer the latter—but we may be biased). Today, tri-tip’s popularity continues to grow far and wide.  Tri-tip sandwiches are ubiquitous across the Central Coast (you have to try one!)—and an increasing number of restaurants in California and beyond are incorporating this cut into their menus.

Why wasn’t tri-tip popular before the 1950s?

Because it comes from the tip of the sirloin, there is only one cut of tri-tip per side of beef—so butchers used to think it was a waste to use display space to display a steak they could only offer 1-2 of. Instead, butchers would ground the tri-tip into ground beef for hamburgers, or cut it into small cubes and sell it to customers as stew meat. (If only they knew what they were missing out on!)

What exactly is tri-tip, and what’s distinct about it?

What barbecue tips should I follow when grilling tri-tip?

How do I slice a tri-tip?

The biggest mistake you can make with a tri-tip? Thinking your job is done after cooking! Take just as much care with the way you slice your tri-tip as you did with cooking it—an improperly sliced tri-tip can make a perfectly cooked tri-tip chewy and unpleasant to eat (oh no!). Tri-tip can be tricky to slice, as it contains two different grains. Approximately half of the steak contains muscle fibers that run vertically, while the other half contains muscle fibers that run horizontally. Once you’ve located these two distinct sections, cut the steak in half (or thereabout) along the line where the two muscle grains intersect. That way, you’ll have one half of a steak with muscle fibers all running vertically, and a separate half with muscle fibers all running horizontally. Finally, slice against the grain (i.e. perpendicular to the grain) on each half. This will make for the most tender slices!

Whether you call it Santa Maria Steak, California’s Cut, or both—there’s no denying the tri-tip is a tender, flavorful cut of meat that local West Coasters and visitors to our Valley alike can’t resist. Be sure you dig into a Santa Maria Style tri-tip next time you’re visiting, or ask your local butcher if she has a tri-tip roast (or two) for sale so you can grill your own. (Psst…Want to grill your tri-tip Santa Maria Style? We don’t blame you. Download the #SantaMariaStyle Cookbook or check out our recipes for an irresistible Santa Maria Style barbecue feast!