KSBY Televison recently featured the Santa Maria Valley’s Far Western Tavern in its popular news series titled “No Place Like Home,” which focuses on the unique flavors and experiences of the Central Coast. 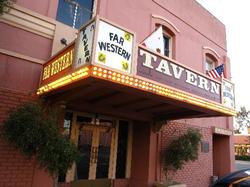 Founded in 1958, the Far Western Tavern is a local landmark of Santa Maria Style Barbecue, and joins the Hitching Post, Shaw’s and Jocko’s as Santa Maria BBQ bastions that have been going strong for more than half of a century. Click here for more information on local restaurants that specialize in this regional culinary tradition.

The Far Western Tavern, which was recently named as one of the West’s top 10 barbecue restaurants by Sunset Magazine, is located on Highway 1 in the town of Guadalupe.

In the story produced by KSBY, anchor Jeanette Trompeter observes, “Generations of families, farmers and ranchers have come to the Far Western when they wanted a good meal, and a connection to the agricultural community it calls home. And even as times changed, cities around here grew up and chain restaurants moved in, the Far Western has held it’s ground.”

This is an apt description of not only the Far Western Tavern, but of several local barbecue establishments and even the phenomenon of Santa Maria barbecue itself. Just more proof that good taste never goes out of style!