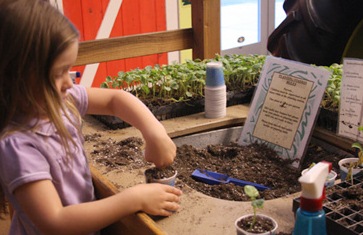 R.H. Tesene was not only legendary for his Santa Maria Style Barbecue skills, but also his generous spirit and community involvement. Today, his legend lives on at the Santa Maria Valley Discovery Museum, where he donated a “Barbecue Hall of Fame” exhibit that teaches children and parents alike about our local culinary tradition.

As noted in a recent feature in the Santa Maria Sun, “The BBQ Hall of Fame” exhibit was donated by Tesene, who originally showcased them proudly at The Beacon Outpost Restaurant and Cocktail Lounge, a joint he built, owned, and opened in June of 1949. The brands you see in the exhibit have a fun story, too. Back when The Beacon Outpost was booming, Tesene noticed that his Sunday nights were slow so he decided to invite guest barbecuers (who were Santa Maria’s finest) who would by nature spread the word and invite their friends, who then invited their friends, and thus a thriving Sunday night was born from then on out. It was tradition for any guest barbecuer to “bring their own branding irons, heat them in the barbecue pit, and burn their brands in the block.”…These historical brands now hang in the Discovery Museum, and always will, as all Tesene wanted was a worthy and lifelong home for his treasured memories.”

Mr. Tesene was also the author of the book Santa Maria Style Barbecue, which is recognized as the authoritative guide to the history and methods of Santa Maria BBQ.

The Santa Maria Valley Discovery Museum is Santa Barbara County’s only children’s museum, and it features numerous exhibits that delve into our local wonders, such as agriculture (pictured here), barbecue, aerospace and nature. One new attraction is the second phase of the “Belly of The Whale” exhibit, which includes a new kiosk that houses a highly interactive educational video that teaches about whale species, their habitats and migratory patterns.

Another exciting development this fall is the October 1 arrival of the highly anticipated Mobile Oil Field Learning Unit (MOLU), a $1.2 million traveling exhibit that teaches children about how energy is created through oil exploration, natural gas and geology. The installation makes its California debut at the Santa Maria Valley Discovery Museum before touring through Southern California schools and other museums in November.