In 1923, the legendary filmmaker Cecil B. DeMille built an epic Egyptian scene for The Ten Commandments. The Guadalupe-Nipomo Dunes Center has unearthed more sphinx heads (and bodies); artifacts from the Hollywood movie scene. It is said that after the filming, the set was too expensive to move and too valuable for others to poach. So, DeMille pushed 21 sphinxes into a trench and buried them. And there it lay, forgotten, for the next 60 years. It still sits there, buried in the sand, known as the “Lost City of Cecil B. DeMille.”

In 1983, a group of determined film buffs, inspired by a cryptic clue in DeMille’s published autobiography, located some of the remains of the set. In 2014, archaeologists excavated a plaster sphinx. It was partially excavated in 2012 until funds ran out. In that same expedition, a hind leg and a paw of another sphinx were unearthed. Historians believe now that the sphinxes were in the exact location they were when they were filmed. 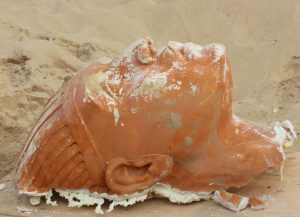 Most recently in November 2017, a team of archeologists and Art Deco restorers unearthed another remarkably intact 300-pound paster sphinx head. The fingerprints of 1923 Art Deco artists were still visible in the plaster sphinx, as well as pieces of horse hair that had been used as a binding agent. While most of the items previously found have been white or light peach in color, a prop choice thought to be made to accommodate the film’s black and white filming, this head is a bright terra-cotta orange. 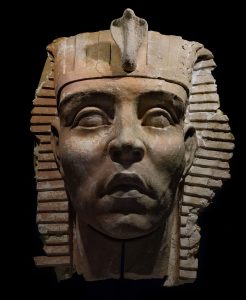 A unique and fascinating exhibit is displayed at The Dunes Center, featuring a variety of artifacts from the both the set and the people who were working on the production. A short film shows the recovery effort of the set, and the people involved in that process. The area is now a registered archaeological site.

Read more about the findings in the Los Angeles Times.