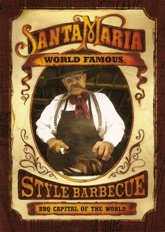 Last year was a big one for California’s Barbecue Capital, and 2010 is set to sizzle as well.

In February, we launched this blog, the Official Santa Maria Style Barbecue Blog, brought to you by the Santa Maria Valley Chamber of Commerce. Sixty posts later, we’re turning the corner into the new year.

The year saw the introduction of the DineOut: Santa Maria Style dining promotion, which was a big success, and which will return in 2010.

On a cultural note, the Santa Maria Valley’s PCPA Theaterfest earned notable awards from Stage Scene L. A, and the Dunes Center in Guadalupe shined in the spotlight as well.

We expect equally delicious things in 2010 as well, so please stay tuned to the Official Santa Maria Style Barbecue Blog for the latest news and events from California’s Barbecue Capital. Salut!