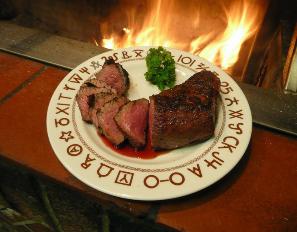 The August issue of Westways magazine delves into “the smoky allure of Santa Maria-style barbecue” in its four-page article entitled, “Open Pit.” Here, author Sarah Tenaglia introduces readers to the origins of Santa Maria Style Barbecue and local barbecue icons such as Ike Simas of the Santa Maria Elks Lodge and Frank Ostini of The Hitching Post II. She also analyzes what makes this style distinctive, quoting Simas: “In other parts of the country, they put sauces or rubs on the meat because they don’t use choice cuts . . . our meat is of the highest quality, and we like to taste it and not disguise it with alternative flavors.” The article also highlights three favorite dining locations: the Far Western Tavern, Jocko’s and the Hitching Post II.

Word is definitely spreading thanks to articles like these. But if you really want to enjoy Santa Maria Style Barbecue at its finest, we invite you to come enjoy it right here in the Santa Maria Valley.