The National Audubon Society’s annual Christmas Bird Count (CBC) began over a century ago and is now in its 118th year. Annually in December and January, people all over the U.S. and other countries go out on their chosen day to count their local birds. 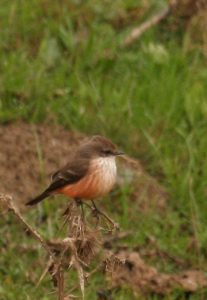 “There are approximately 140 different species of birds we expect to find on the count this year,” said Alex Abela, organizer of the Santa Maria/Guadalupe Bird Count. “They have been reported consistently over the years in the Santa Maria/Guadalupe count circle. However, what makes the count special are the unexpected birds we may be lucky to find. Unexpected birds we have sighted in the past include a White Wagtail, a Masked Booby and Harlequin Duck – it’s like seeing a grand slam home run in real life.”

The CBC is a long-standing program of the National Audubon Society, with over 100 years of citizen science involvement. It is an early-winter bird census, where thousands of volunteers across the U.S., Canada and many countries in the Western Hemisphere, go out over a 24-hour period on one calendar day to count birds.

The 15-mile diameter Santa Maria Valley/Guadalupe count circle extends along the coast from San Antonio Creek to the south, the Santa Maria River estuary to the north and inland to approximately the Santa Maria Airport. This count circle encompasses an area that boasts an especially large number of bird species. It historically ranks among the top five percent of the some 2,000 counts conducted in the continental U.S. in terms of the number of species identified.

“We have one of the very highest ratios in the country in terms of the number of different species sighted to the number of participants that attend,” said Abela, indicating this bird count is a hidden gem.

“Given the more than 2,000 counts that are conducted throughout country, the results of this nationwide effort provides one of the best insights into how the various species of birds are doing – are they holding their own, are they diminishing, or perhaps they are doing better than expected?” said Abela. “This allows for government and private agencies to focus funding and effort on those species which need them the most.”

According to Audubon, there is a specific methodology to the CBC, and all participants must make arrangements to participate in advance with the circle compiler within an established circle. Anyone can participate. The CBC depends entirely on donations to provide support to compilers and volunteers on count day, to manage the historic database, and to fund the technology to make historic data available to researchers. However, participants are not charged a fee. The data collected by CBC participants over the past century and more have become one of only two large pools of information informing ornithologists and conservation biologists how the birds of the Americas are faring over time.

The Santa Maria Valley is an attractive destination for birdwatchers. It is a perfect location to anchor yourself for a birding trip to the Central Coast of California. Close to the birding meccas of Santa Barbara and Morro Bay, it is a birding hotspot in its own rite. From a coastal climate that winegrowers love to quaint hotels that won’t break the bank to signature barbecue that’ll have visitors wanting seconds, guests are sure to fall in love-at-first-sight with the area. You’ll find the Santa Maria Valley the ideal home base, where you can eat, drink, enjoy nature and do more for less.

“From a personal perspective, birdwatching is really a great hobby,” said Abela. “Other than an investment in a decent set of binoculars, you can bird watch and count birds wherever you happen to be, typically for free. And, you always have the thrill of adding another checkmark on your life list when you see a species for the first time. There is also a business perspective. In November 2017, a very unexpected species of duck, a Garganey, showed up in a park in Santa Maria. This attracted literally a horde of birdwatchers that traveled a considerable distance to see it and perhaps photograph it. These folks possibly stayed at a hotel, ate at the local restaurants, and possibly picked a up a souvenir or two at the local shopping mall. Good birding areas like Santa Valley are good for business.”